In early fall, often the focus is on the high color potential of pumpkins, chrysanthemums, cold weather pansies and fall blooming perennials such as aster.  Grasses, too, come into play for their subtly changing fall color and approaching winter landscape structural interest.  But today we want to give centerstage to the underused and underappreciated genus Carex.

Carex and the Family of Sedges

Although grass-like, Carex in the plant kingdom is actually part of the sedge or Cyperaceae family and is separate and distinct from the grass family Poaceae (or Gramineae) in both its internal structure and flowering.   Unlike the grasses, which contain an overwhelming 600 genera and 9000 species, the smaller sedge family is composed of approximately 115 genera and 3600 species.  And of this group, genus Carex sedges with their triangular stemming number approximately 1000 species.

While some species may be used for specialty paper and baskets, for gardeners interest lies primarily in their

Obviously, not all Carex sedges reach the marketplace. Of the 1000 or so that comprise the genus, perhaps 100 have ornamental value for the garden.  Most of these have their origins in wet or moist habitats located in temperate zones around the world and so are easily adaptable to the American garden.

And if that isn’t enough to whet the gardener’s appetite and interest for an easy plant, you add they come in all shapes, sizes, and colors as well, and perhaps it is time to rethink the use of Carex in your garden.  Selections under cultivation originate from all over the globe - Japan, Europe and Asia, China, Africa, North America and New Zealand -  all offering something distinct and worthy of consideration in the garden.

Color
For color, choices include  all shades of green – pale, light, medium, dark -  glaucous blues, brilliant and creamy yellows, copper and bronze, and numerous variegated leaf colors. There is even a green selection so light in color it appears silver, a lovely cascading flow of shimmering silver known as Carex albula ‘Frosted Curls’ or ‘Frosty Curls’. 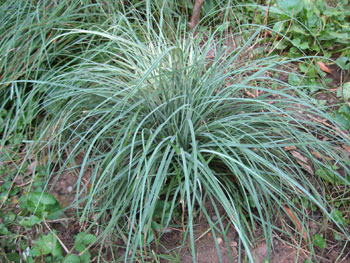 The Blues:  Carex flacca, Carex flaccosperma, or Carex nigra offer variable heights from 6 inches to 2 feet high.  Shown to the left is Carex flacca 'Blue Zinger', a wonderful 12-inch high cultivar which looks wonderful in pots as well as loosely mounded in the garden.  Carex flaccosperma has green atop and blue underside the slightly wider 5/8 inch leaf, forming loose tussocks. Carex nigra is another blue with a black stigma, not too showy, but some like the nuance.

The Yellows:  If it's yellow you are looking for, one cannot find a better choice than Carex elata ‘Aurea’, or Bowles Golden sedge, an intense yellow and golden striped selection which has found its shallowly submerged niche in the well-appointed water garden.  Sun brings out its intense yellow in its graceful 2 ½ foot high leaves.  As for creamy yellow, try another elata cultivar, ‘Knightshayes’.

The Browns:  New Zealand reigns supreme for introducingcopper, brown and bronze foliage to US gardens with such species as buchananii  with its 2 foot high tufted vertical growth or flagellifera, which looks like  buchananii but is  less vertical and a little softer in the landscape. Both are stunning if contrasted with silvers or brighter floral touches, but take care to visually separate them from bare soil or mulch which siphons the life from their color and unique form. 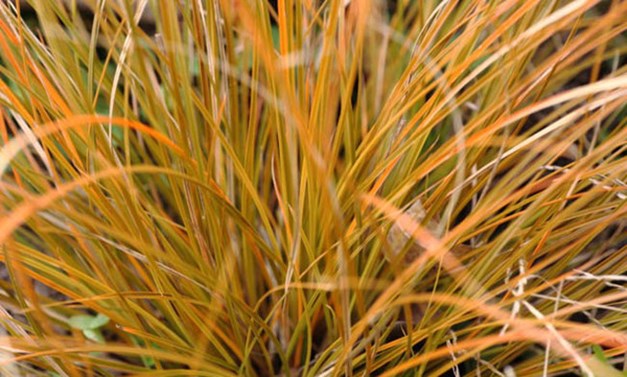 The Oranges: New Zealand can also claim first to introducing the color orange with Carex testaceae, as pictured above, a slender leafed sedge 15 inches in height that colors up with orange highlights in the cooler weather. 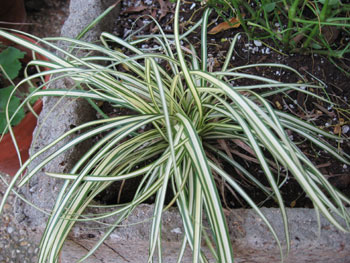 Many variegated leaf forms - thanks to Japan’s interest and fascination in all things variegated - are available to suit all gardening tastes.  A workhorse in the garden since its introduction in the mid-1800’s is the fully green morrowii, from which beautiful green centered and white or creamy margined cultivars including ‘Gilt’, ‘Ice Dance’, and ‘Gold Band’ have been created.  For an even more refined choice, there is the aptly named morrowii var. temnolepsis ‘Silk Tassel’ , which forms a fountain of finely textured foliage with its 1/8 inch leaf of dark green edges and clear white center.  Carex pilulifera ‘Tinney’s Princess’ shown to left.

Plant Size and Function
In considering the best use of the landscape’s physical and visual real estate, plant size makes a difference.  Carex sedges accommodate large and small garden areas with sizes ranging from a petite 4 inches in height to 5 feet tall and wide. And size, for sedges as well as humans, sometimes predisposes use or suitability for a function.   Those sedges diminutive in size and well behaved are best suited for a rock garden.

Carex petriei, a vertical dwarf copper- bronze New Zealand choice with curling tips much like a small buchananii tops out at 8 inches

Carex pensylvanica, a mowable 8-inch sedge in a soft, uniform green is similarly being used as a resilient lawn alternative in both dry sunny and dry shady sites in the mid-Atlantic region and northward

Since Americans do love their grassy lawns, the fact that individual plants are barely distinguishable (looking more lawn-like) is a plus.

More substantive leafed and larger sedges are suited to almost any function other than lawn or rock garden.  They can be employed as accent plants in pot or in ground, as groundcovers, or as specimen plantings.  A few interesting choices for an urn or interesting Frank Lloyd Wright inspired vase, for example, include Carex albula ‘Frosted Curls’ which almost demands a raised container to show off its slender and silvery leafed  cascading form, or perhaps the 2 foot high Carex nudata from Northern California, a dense tussock of green foliage with strikingly black ornamental flowers arching over the foliage in late winter and early  spring. If in the ground instead, the 8 inch high evergreen plantain leaf of Carex plantaginea  will amass to form a perfect foil to ferns.  Another choice, Carex muskingumensis, forms a wonderful 2-foot high palm-like massed groundcover and acts as a backdrop for more relaxed, prone plantings.

Architectural Interest
A look at this interesting genus would not be complete without addressing its use as an architectural element in the garden.  The form of many of the sedges are tussocked and tufted and, as already mentioned, sized to please any palette.  This is a somewhat unusual growth habit which in and of itself adds to a garden’s interest. Some of the tufted shapes will also have curling on the very tips of the leaves, some will be more upright, some cascading in soft mounds (Carex morrowii var. temnolepsis comes immediately to mind here), further enhancing the visual interest.

Those large, 2 foot hairy sedge bronze mounds of Carex comans are quite striking with their pendulous mops of fine foliage. It fills and it spills. All sedges are not created equal in this regard, however. A few more of the many outstanding forms should be mentioned here for their architectural boldness. 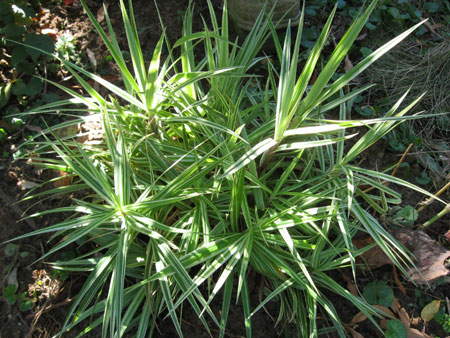 For an unusual and interesting shape there is Carex phyllocephala ‘Sparkler’ as shown to the left with its canelike stems and whorled clusters of variegated leaves up to 2 feet high and its creamy margins which make the plant look almost white.  It is a plant that causes a passerby to stop and examine.  Another interesting shape is Carex muskingumensis “Wachtposten’ with upright, sentry-like palm branches.  Mentally picture palmettos at Hilton Head.  A great choice in a closed garden setting.  Massed or in specimen solitude, the taller sedges such as 4-foot high Carex crinata with its arching stemmed inflorescences throughout the summer and graceful wafting in the breeze draw attention in the larger landscape.

For the home gardener, a garden may be as small as a pot with an interesting plant on the back patio or perhaps acreage of untamed beauty around a manse with more planting beds and human-tended plantings as the landscape approaches the home site.  Carex sedges are at home in either and offer tremendous variation in height and spread, color, texture, leaf form, and growth habit. The gardener has but to weave the common thread of a chosen sedge color and form through the garden to create a visual flow of interest.

And yes, many are evergreen and need only a clean-up or cutback to refresh in the spring.  The fact that sedges are grass-like yet colorfully different allow the color interest to be extended through the year.

This author, for example, loves blues and incorporates plants that echo that – Carex flacca ‘Blue Zinger’ spilling around the Korean spice and then repeated up the path as it approaches the Nippon daisy, a little further on before arriving at the interesting form of a bluish rue among some pink chrysanthemums, all playing against a background of blue Boulevard cypress .  The ‘Blue Zinger’ sedge, though, invites the eye to travel along the path and to explore what is there.

And isn’t that what gardening invites us to do?  So enjoy, explore, and select an architecturally interesting Carex for your garden.  You won’t be disappointed.